Note: I have to give credit where credit is due. This is kind of in reaction to Ryan’s blog. His question was why do people bother to call themselves agnostic? It seems like one of those PC labels that people use when they don’t want to say that they are atheists, because it “offends” people if you tell them you don’t believe in god. Oh, and I’ve given up on censoring all my foul language. You can blame John Goodman.

Now, at various points in my life, I have been accused of being (among other things) a nihilist, and it’s highly likely that my beliefs do fit under certain definitions of nihilism.

Nihilism can refer to different things. It can mean that values do not exist but are invented OR specifically that there are no moral values OR that life itself is without meaning or purpose.

But can you really be a full-blown, believe-in-nothing nihilist? 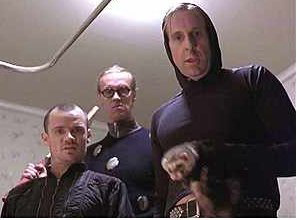 Nihilist #1: We believe in nothing, Lebowski!

It doesn’t seem possible to really believe in NOTHING. Don’t you at least believe that you believe in nothing? Really this could devolve into a semantic debate about what one means by “belief,” and I would like to avoid such things. But even the most disbelieving person surely must think that certain things are true, or always the case. As I write this, surely I believe, for instance, that I am writing in English, that CCR is playing in the coffee shop as I write, and that all the people around me are physically present with me in said coffee shop.

Of course sometimes I do doubt if any of this is real.

And if I’m perfectly honest, I don’t think that words really mean anything apart from their arbitrary assignment in our language.

But within the context of my day to day experience, when I’m not thinking about it, I seem to act as though I believe in a lot of things.

So I think it’s probably impossible to be THAT kind of nihilist. 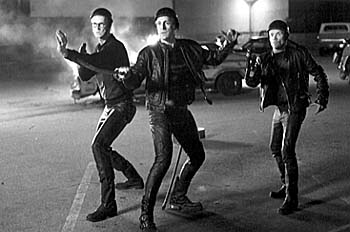 Walter Sobchak: No, without a hostage, there is no ransom. That’s what ransom is. Those are the fucking rules.
Nihilist #2: His girlfriend gave up her toe!
Nihilist #3: She thought we’d be getting million dollars!
Nihilist #2: Is not fair!
Walter Sobchak: FAIR?! WHO’S THE FUCKING NIHILIST HERE! WHAT ARE YOU, A BUNCH OF FUCKING CRYBABIES?

In The Ground Beneath Her Feet, Salman Rushdie wrote that: “A photograph is a moral decision taken in one eighth of a second.”

In an ethics course I took a couple years ago, I entertained the idea of arguing with my professor that I could make a moral theory based on the idea that the highest good is that Sky Blue Sky is a good album. But it’s impossible to have that kind of discussion with someone who believes that “the good” is real.

Though I still think I could do it.

It need not be Sky Blue Sky. It could be Revolver, which might make more sense. Or Talking Book. Or Nashville Skyline. The crux is not that these are all exceptionally good albums, because surely not everyone would agree with me on this[2]; it’s all just a matter of taste. Nor does this need to have anything to do with music. It just does for me.

Because even though I don’t buy into a system of belief, a system of right and wrong, universal truths, spirits, souls, gods, karma, governments, constitutions, most scientific findings…

I do believe that there might be something other than all the bullshit.

Superficial and trivial to most, but I have a profound relationship to Parsley, Sage, Rosemary and Thyme. When I listen to it I have the same feeling I get when I lose myself in the night sky. Or when I’m in the middle of the woods away from everything. These are the things that make me lose my Self, dissolve my Ego, make me feel connected.

I suspect that truly religious people get a similar feeling when they are lost in worship. But just because I don’t follow a canon, there are many who would condemn me, call me a nihilist.

But the label doesn’t matter.

The important thing is that at least I have something.

[1] Are they the good days or the bad days? I don’t know.
[2] Though I cannot fathom how someone could NOT like Talking Book.

6 thoughts on “We Believe in Nothing, Lebowski!”