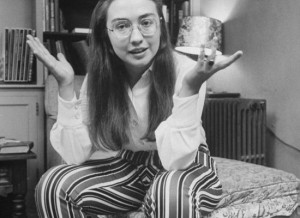 I love this photo. (via ABCNews, Getty image)

For weeks, I’ve been trying to write something about the latent sexism that I hear in nearly every negative claim made about Hillary Clinton. The problem is that I don’t have a knockout argument, and I fear this is the case because sexism is so deeply ingrained in us we can’t see it. We subconsciously don’t want to believe that women can be good leaders.

But I have to try, because I don’t see enough people talking about this (though if you search you can find some op-eds).

As a disclaimer, I’m not arguing that you should vote for Hillary Clinton, I’m trying to show you that institutional sexism is affecting your perception of her. 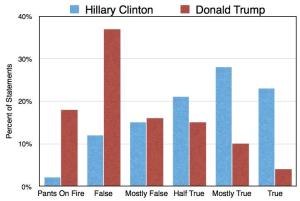 There’s even a chart! (via American New X)

I read an article yesterday, which explained very clearly (with data and facts!) that Hillary Clinton is generally honest. She is one of the most honest politicians that PolitiFact.com tracks. I think this author’s assessment was probably right, that people fixate on her few untrue assertions: “It seems that people want Clinton to be a liar, and really don’t care that Trump actually is one.”

Using her email scandal against her is beating a dead horse at this point. Her biggest opponent in the primaries was sick of her damn emails back in October of last year. The director of the FBI said it would be unreasonable to press charges. If you’ve ever worked for the government and/or had a government phone, you might think this scandal is ridiculous for the same reasons I do. (I suspect that Clinton wasn’t trying to hide information, but, rather, trying to use her phone[s] in a way that was actually convenient and efficient–the government’s protocols are not.)

Not to mention, in an era of Wikileaks and Panama Papers and an OPM data breach that compromised personal information of an estimated 21.5 million people, do you really believe that cybersecurity is possible? Really? And what do you think was in these classified emails? Do tell, because I love a conspiracy theory.

But as far as I can tell, this is the reason why a lot of people don’t trust Clinton.

Women are generally viewed as more untrustworthy than men.

There are actual studies about this. I’m not making it up. Women are considered too emotional, dumb, two-faced, or conniving to be trusted. The ubiquitous cliché we see in popular media is of the woman stabbing her best friend in the back.

There is also a more serious piece of evidence in the fact that we tend not to believe rape victims.[1] As an example, 55 women have come forward with allegations of sexual assault against Bill Cosby, spanning from 1965 to 2008. There are currently eight civil lawsuits against him and one set of criminal charges (obviously some were outside the statute of limitations), but the court of public opinion didn’t listen for a long time. In fact, it took a stand-up routine by Hannibal Buress (a man) going viral before people started paying attention.

To add insult to injury, men have lower moral standards than women, especially when they feel threatened. We expect men to be unethical when it’s an advantage to them, because that’s what they do. A consequence of this is that we hold women to a higher ethical standard than men (while assuming that they are untrustworthy–we can’t win).

It’s not just Clinton’s perceived lack of trustworthiness. I also heard a story on NPR the other day about how people don’t like Clinton because she doesn’t seem warm and caring. She comes across as cold, calculating, and as someone who would do anything to win the presidency.

Two questions: Is it important to you that the Commander in Chief in the United States be warm and caring? Do you evaluate men in terms of whether or not they seem warm and caring?[2]

Hillary Clinton is judged and held to a different standard because she is a woman. My suspicion is that people who “just don’t like her,” don’t like her because she doesn’t “act like a woman should” (whatever that means).

We want women to be nurturing because this is how femininity has been defined. And what do we want out of a leader? I assume we want someone who is determined, strong, authentic, etc.–which are traits that we have already coded as masculine.

Yes, this is satire.

We have to fight against our binary gender bias that has been coded in us since someone evaluated our genitals, slapped one of two sexes on our birth certificate, and we were taught all the ways that our sex was associated with a gender–and this was told to us via toys, bathrooms, colors, TV shows, movies, sports, and with phrases like “boys don’t cry,” “throw like a girl,” and “boys will be boys.”

Our society genders things that cannot possibly be inherently gendered (like Legos and the color pink),[3] and we employ the very ingrained categories of feminine and masculine in everything–even food! It takes a lot of mental work to recognize when this happens and to try to unravel it. I’m feminist as f*ck,[4] so to speak, and I still screw this up sometimes. (So, frankly, I don’t have much hope for the rest of you.)

Here’s my point. No one is looking at Clinton as just another politician. Even if 71% of Americans claim that the gender of the president doesn’t matter to them, we have an unconscious bias against women (study, after study, after study, shows this).

I learned the hard way many years ago that the first thing people see when they look at me is a gender. Before they know anything about me, they have already made snap judgments based on ingrained conceptions of gender that we can’t escape. (Though, the good news is that we can counteract for our biases.)

In some cases, people have already dismissed me. In other cases, they have already reduced me to an object. In most cases, I won’t be heard or taken seriously.

We do this to Hillary Clinton whether we want to admit to it or not.

Hillary Clinton was a activist for social justice in college. She worked for the Children’s Defense Fund. She advocated for disadvantaged children to receive health care as a lawyer in Arkansas and as First Lady. All signs point to her genuinely caring about children and families. She has worked as a lawyer and a law professor. She has served as a U.S. Senator and as Secretary of State (as have six presidents).

She is currently the most qualified person for the job of president within our neoliberal, imperialist, indirect democratic political system as it exists. Yes, she’s establishment. Again, that’s a separate issue. (If you want to take down the system, then great! But where were you when you thought Bernie Sanders was going to be the Democratic nominee? Where were you during eight years of Obama’s presidency? Why are you suddenly worried about oligarchy now? Hell, where were you during the Bush I and II administrations? I digress.[5])

Our current president said “there has never been a man or woman, not me, not Bill, nobody, more qualified than Hillary Clinton to serve as President of the United States of America.” And, yet, people are complaining because she doesn’t seem “warm” enough or “trustworthy” enough. What, she’s not the grandmother/Eagle Scout your biases are telling you that you want? For president?

You vote for president in order to hire someone for a job, so why not cover up her name and look at the damn resume while taking into consideration what the president actually does. If you just don’t agree with the Democratic platform, that’s a separate issue.[6]

To sum up, why does everyone hate Hillary Clinton? There are numerous reasons, some more legitimate-sounding than others.[7] But the fact that she is a woman is one of them, and it’s a big one.

And not enough of us are talking about it, because we might not realize it or just won’t admit to it.

I get it–it’s uncomfortable to think about being unconsciously biased.

[1] There’s also the possibility that we just don’t care, because virile men who have never had their autonomy questioned or threatened secretly don’t believe that rape is a thing.

[2] I actually do evaluate men this way. I stopped (not really, but I considered it) reading philosophers whom I thought wouldn’t give me a platonic, non-gropey hug. John Dewey–probably a hugger. Immanuel Kant–probably not. Schopenhauer–no way. Sartre–definitely a groper.

[3] If it’s not obvious, I’m in the “gender is a social construct” camp, but you don’t have to be to agree with any of the rest of this. Pink is a really just a wavelength in the visible spectrum, if you think wavelengths have a gender, then, well, you probably have not made it this far reading anyway.

[4] Even though there are some men I genuinely like and respect, I actually would be fine with never dealing directly with any man ever again. Men, for thousands of years, you have had your chance to not screw up the world, and you failed. Don’t you think it’s time you stepped aside?

[5] Can we stop perpetuating the myth of fairness and equality as the backbone of America? Our political system was designed for the privileged. The “founding fathers” weren’t poor farmers pulling themselves up by their bootstraps. The American Revolution wasn’t the people’s revolt. It was the bourgeois uprising against the nobility.

[6] “I just don’t like her” is a reason for Jerry to break up with a woman on Seinfeld. This is not a legitimate reason to discount a presidential candidate. Take your role as a citizen seriously. Your choice affects other people. This is how democracy works.

[7] I actually heard her called a “war-monger” the other day, which made my head turn. You rarely hear the word “war-monger,” let alone in reference to a woman. But she did once refer to the Iraq war as a “business opportunity.”