Donald Trump clearly doesn’t care about governing or know anything about governing. He has never given any indication that he did. Vague statements in his campaign didn’t magically turn into knowledge after the election.

Donald Trump wanted to be president in order to protect and promote his business and the Trump brand. He probably also wanted the power, but we have no way of confirming the latter other than his insistence that he won the election in a landslide [read: he didn’t] and his language befitting of a demagogue. We do have evidence, however, of his financial stakes.

Trump has refused to separate his business interests from his presidency, refusing to put his assets in a blind trust, instead handing over management to his two oldest sons. After the election, the Trump Organization doubled the initiation fee for its Mar-a-Lago resort — which Trump has since called “the Winter White House” — to $200,000. Trump Hotels’ CEO also said, after the election, that they planned to triple the number of Trump Hotels in the country. And that’s just in the U.S. According to the Washington Post, “at least 111 Trump companies have done business in 18 countries and territories across South America, Asia, and the Middle East.”

This is dangerous to the American people. The President of the United States is supposed to represent national interests and not, say, what he stands to profit from a casino or a luxury condo in Turkey. It’s not a coincidence that the Muslim-majority countries on Trump’s first attempt at an anti-immigration executive order were countries in which he has no business investments. The stated purpose of the order was to prevent terrorists from entering the country, even though no terrorist attacks have been committed on U.S. soil by people from any of the banned countries. It’s not hard to connect the dots.

You can find a laundry list of Trump’s business conflicts of interest here. It’s long. And it’s not subtle. My personal favorite is the Chinese trademark dispute that had been going on more than a decade and was magically settled in the Trump Organization’s favor after he became president.

This isn’t new, of course, and it isn’t just Trump. We have been led into war(s) in the Middle East by oil executives so the oil industry can profit. From a piece on the 10 year anniversary of Operation Iraqi Freedom: “Before the 2003 invasion, Iraq’s domestic oil industry was fully nationalized and closed to Western oil companies. A decade of war later, it is largely privatized and utterly dominated by foreign firms.”

This was all a detour. Because my point isn’t really about Trump himself. Long before the election, even long before people thought Trump running for president was a joke, I heard people say that they thought it would be a good thing for the United States to be led by a businessman. Well, here you have it.

Jared Kushner, Trump’s son-in-law[1], said in an interview published in the Washington Post, “We should have excellence in government. The government should be run like a great American company. Our hope is that we can achieve successes and efficiencies for our customers, who are the citizens.”

I don’t get it either, Don.

But a country isn’t a business. A citizen isn’t the same thing as a consumer.

The primary purpose of a business in a capitalist system is for the owner(s) of said business to profit. The secondary purpose is to provide a good or service that customers need or want. (I’m pretty sure I was taught in my high school economics class that consumer needs came first, but, well, that’s just a lie.)

The purpose of a democratic government (built on the foundation of social contract liberalism) is to keep us from killing each other and from taking each other’s stuff. The government is there to protect us from each other. The U.S. Constitution went a step further than this, and it is written to protect the citizenry from a tyrannical government.

“Tyranny” in the late 18th century was taxation without representation, debts from the French and Indian War, being forced to quarter British soldiers, the Boston Massacre, etc. We think of tyrants today as leaders of non-democratic nations who kill their own citizenry with violence. They might also be leaders who limit free press, limit the free practice of religion, people whose policies promote systemic racism and sexism (of course without acknowledging the existence of such blatant discrimination and social inequality), people who look out for their own business interests by eliminating corporate taxes and punishing the poor by outsourcing jobs and increasing things like sales tax, health care costs, and cost of living, but I digress.

Think about how a representative democratic government is supposed to run (it doesn’t, but pretend). Citizens vote for people who will represent their policy interests, citizens talk to their representatives about their concerns and needs, their representatives vote according to said interests. In order to be informed, citizens must have access to things like congressional hearings and debates. Communication and transparency are crucial.

When you run a business, by contrast, you do it behind closed doors. You keep people close to you who stand to profit or lose as much as you. You hire your family because you don’t trust anyone else. There is no transparency. You do not have to tell your stakeholders the details of what you are doing, except maybe with an “annual report” that can be dressed up however you want. You just have to keep stakeholders happy with the results. Customers are at the very bottom level of people you have to please.

How do they do it?

Well, they are led by white supremacists and conservative Christians, which helps, but they also capitalize on the bizarre, excessive cultural appeal of the wealthy businessman.[2]

There have been studies on the appeal of the rich. Michèle Lamont, in The Dignity of Working Men, found that the working class (specifically the white working class) admires the rich, but resents professionals, which presumably does not include business owners. They see professional networks, like those maintained by the “Washington insiders,” as insincere, shallow, and morally corrupt, and not like close, local family relationships that they maintain. They don’t want to become professionals like doctors or lawyers, they just want to earn more money — that is, they want wealth without the “elitism.”[3]

It’s understandable, and, from my experience, people with this view aren’t exactly wrong about the lack of sincerity and morality among professional networks. When I hear the phrase “morally corrupt,” Paul Ryan is the first person who comes to mind, and he’s certainly a professional something. But it has to be more than this, because the white working class supports Donald Trump, arguably a human being with absolutely no moral scruples or sincerity. (Hell, he doesn’t even have syntax.) But it’s true that he doesn’t seem like a politician, because he isn’t one.

I suspect that it has something to do with the fact that we have fetishized the ideal of the businessman so much that we think being wealthy means that someone is intelligent and hard-working. We see someone not paying taxes as a smart thing — it’s beating the system, getting around having the government “take money” from us.

We don’t care if businessmen are dishonest. In fact, we expect them to be. Sleight of hand is how we expect businesses to work. Tax write-offs are clever shortcuts. Bribes are par for the course. You scratch my back, I scratch yours. That’s just how it is. Most of us are too busy dealing with the daily grind, with our direct supervisors, customers, and the consequences of company policies that directly affect us to be too concerned with what the suits are doing at HQ. Maybe we grumble about the salary the CEO takes in while we don’t get raise for years, but that’s as far as it goes.

The thing about wealth is that most people don’t know what it is or what it means. We’re trained to focus on income. Trained to think that work will lead to earning. Trained to think that Trump donating his salary to the National Park Service for a tax write-off is a noble thing. But wealth isn’t income. Wealth isn’t work. Wealth comes from investments. Wealth is money that makes more money. It doesn’t require you to do anything.

And maybe this is why the idea of it appeals. Put a few people you trust, maybe your children, in charge of overseeing things and then have your money earn you more money without you really having to work.

But why do we celebrate other people who do this while insisting that the poor are lazy? Why do we want the wealthy in charge of the government? How could this non-skill, this dumb luck of being born wealthy, lead to someone being qualified, say, to tell me that I don’t deserve access to health care because I’m depressed?

Why are businessmen allowed to write laws that they directly profit from? 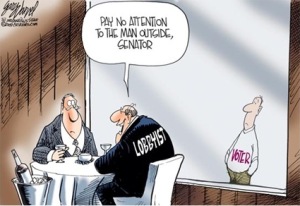 Of course, we all know it works this way.

Our government is run by exchanges of money. Lobbyists don’t want government regulations on the products they sell, for example. They want to make pharmaceuticals cheaply with as few regulations as possible, or they want to exploit natural resources while ignoring the environmental consequences. They want us to be just docile enough that we keep spending money on things that we are convinced we cannot live without. So lobbies “donate” to congresspeople who will vote in their favor.

That’s how it works. It doesn’t matter that most Americans are horrified by a man massacring school children and a majority of Americans want stricter background checks on guns, the NRA will spend the money to get the votes they need to prevent new legislation. Same with health care. Same with anything. And of course Democrat members of Congress do this, too.

These people aren’t public servants. They aren’t representative of their constituents. This isn’t even remotely democracy. This is allowing businessmen, men in suits, men on golf courses, to influence every aspect of our lives.

Trickle-down economics has been proven to not work, but the trickle-down effect of our irrational fixation and lauding of businessmen (thanks, Ayn Rand) has directed the current projection of human existence.

And I wonder why this doesn’t seem to bother most of us. And I wonder to what end this will lead.

[1] I would give you his job title, but I don’t think he actually has one, and if he does, it’s totally made up.

[2] There are ultra-wealthy businessmen on the Left, too, of course. And I know plenty of otherwise liberal people who covet wealth and don’t seem to see the inherent conflict there. People who identify as liberal generally value human empathy, which puts them in a conflict with the desire for wealth, and this is exactly what makes many well-meaning celebrities look like giant douchebags.

[3] By “elitism,” I think I mean the self-righteousness that people on the Left have when they call out the Right for doing something stupid, cruel, or something-ist. I’m loosely equating identity politics with elitism here, because I think that’s how identity politics are perceived by the “anti-political correctness” crowd. To be fair, calling out social problems has to be done in such a way that doesn’t ignore the fact that we all constantly contribute to the systemic practices that oppress and cause harm — we have to or we can’t survive. That’s why they’re so insidious — but critique is a delicate balance to strike and the reason why I keep my mouth shut a lot of the time.

2 thoughts on “The Fetishization of the American Businessman”