Trigger warning: I talk about suicide in this. And to anyone reading this who knows me and thinks they should worry about me — I’m fine. Really. 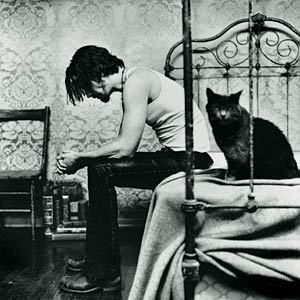 From the Euphoria Morning album artwork. 1999.

I was sad when I heard that David Bowie died. I felt blind-sided when Prince died. It just is sad when people who make music and art that reaches a lot of people die, because collectively we lose something that made existence better.

Thursday, when I heard that Chris Cornell died I felt my stomach drop, but when I found out that it was a suicide, something inside of me broke.

Obviously I didn’t know Cornell. I have no idea what he was like as a person. But I’ve loved his music since I was young. Superunknown and Down on the Upside are two of the most formidable albums for my emotional development, and I continued to follow Cornell’s career, even through Audioslave. I was listening to Euphoria Morning just last week (I still had it on cassette).

But this isn’t about his musical impact. It’s about what I got out of his words.

I can’t guess what Chris Cornell felt, what it was like inside his mind, that’s presumptuous even for me, but I do know how I felt as I saw my reflection in his lyrics and in the haunting wail that was his distinctive voice. And I can’t chalk this up to the angsty styling of ’90s grunge any more than I can call mine teenage angst. Because his more recent work still got me.

These are among the songs and lyrics that affected me the most. Because they aren’t about the sadness of heartbreak. They’re about the despair that comes from existing in a world that feels cold and alien. I know this feeling, I know this feeling intimately. It is, in fact, my primary feeling.

So when I hear that someone like Chris Cornell committed suicide,[1] it makes me stop and pause.

Because what was it? What was the threshold that was crossed? Why now? We’ll never get answers to these questions. Even if there was a note left behind, I’m not sure that really belongs to the public, and he already gifted us so many of his words.

I just selfishly want to know, because I know what living on that edge feels like. I know what my own thresholds are. I know when I need help and when I simply find my day-to-day life to be an annoyance that I tolerate.

Suicide is not something I routinely “struggle with.” I hate that language.[2] It isn’t necessarily suicidal to think about death. We associate suicide with depression, but as much as we like to pathologize, that just isn’t always the case either. For me, death is part of pondering existence. It’s mostly an intellectual question.[3] But it’s also always an option, sitting there up on a shelf in my mind. It’s only when I talk about it that I realize for most people it isn’t. For them it’s an inevitability, but not a choice. But it’s been there for as long as I’ve been listening to Chris Cornell’s music, and I suspect it was there for him that long, too.

There are plenty of other people like me and the people who find themselves in these lyrics — people who are burdened by the emptiness of existence, upset by the concept of time, bothered by humanity and the meaninglessness of life, alone. I rarely talk about these things with other people, because most people think it’s sad to live this way.

But it isn’t really, I swear. Until something like this happens.

And then I wonder.

I’m sorry Chris Cornell left us to wallow in the blood and mud without him. But it’s my favorite Soundgarden song that’s in my head now, and that’s what I will close this with.

[1] There’s no toxicology report yet. His wife insists that he wasn’t suicidal and must have taken too much Ativan for his anxiety, which affected his behavior in a way that was abnormal for him, and that is scary for totally different reasons.
[2] I have a complicated relationship with pop psychology and the common language we use to talk about it that I don’t want to get into here.
[3] It’s possible I’ve read too much Camus.