Denver Post columnist Terry Frei got fired for tweeting: “Nothing specifically personal, but I am very uncomfortable with a Japanese driver winning the Indianapolis 500 during Memorial Day weekend.” 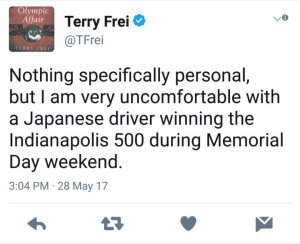 And what infuriates me is that people who get fired like Frei did will continue thinking it’s because people are too sensitive, too soft, too “PC.” And it’s more likely than not that companies that fire people who do things like this only do so because public backlash can hurt sales/viewership/readership profits. They don’t actually care about the offense either. Capitalism generally thrives on bigotry except in these weird, few public cases.

Last fall when I was driving through central Virginia, I saw a bumper sticker on a truck that said something like “Trump 2016: Fuck Your Feelings.” Trump even said at a campaign rally that political correctness was a “big problem” in this country.

Just this morning he tweeted that we have to “stop being politically correct and get down to the business of security for our people.” By “our people” he means white people, and he is one of the worst offenders of perpetuating the idea that political correctness is bad, harmful, and making our country “soft.”

I don’t remember when “PC” became a dirty word, but it has been during my lifetime.

Banning people who practice Islam from entering the country, harassing them in public spaces, stabbing to death other people who come to their defense–not wanting these things to happen has absolutely nothing to do with political correctness.

Political correctness isn’t dangerous. Being politically correct means to avoid using language and performing actions that further exclude and marginalize people who are already socially disadvantaged and discriminated against. It is only a bad thing when it’s done on the surface, done to check boxes, done as tokenism. Political correctness is about the fundamental human need to be recognized and validated. It isn’t about appeasing sensitive people. It isn’t about not hurting people’s feelings.

Sure, it is personal to an extent, but it also isn’t.

When you don’t understand why a roomful of people doesn’t listen to you, but they nod along when a man says the exact same thing you just did. When you try to explain to a male friend why you can’t just go to a random bar by yourself, even if you simply feel like sitting down and having a beer. When you try to teach college students–adults, mind you–the philosophy of John Dewey, and a group of male students in the back make lewd comments about you that you can hear from the front of the room. When you are always the one who gets asked to take notes or minutes in work meetings, even though you have never been a secretary. When you know you make less money than a man doing your exact job, even though he has less experience and fewer accolades. When people only pay attention (always unwanted) to you or tell you that you look nice when you wear a dress (i.e., actively present a gender).

When you retell these experiences to men and they make excuses and justifications. Or, almost as bad, apologies for other men.

These things are all frustrating and unfair, because as they happen in the moment you forget that people don’t really see you as you, they filter you through a gendered, a racial, a “are you like me” lens. You convince yourself that it’s something about you, something you did, that makes people not take you seriously. You adjust your behavior, but nothing changes. You consider that it has to do with your gender, but then you convince yourself that you’re crazy, because the alleged perpetrators of sexism against you are also very nice people. You change your situation as much as you can, and still nothing changes.

But upon reflection you know it’s bigger than you.

You can have one of the most qualified human beings to run for the highest public office in a country get scrutinized and criticized to an unbelievable level and held to an impossible standard that no other candidate has been held to (the only thing close was when a black man ran for and was elected to the job), and see little to no reflection in popular media about the way we collectively treat women differently. (Read this entire tweet thread for an excellent articulation of the continued problem.)

Social inequalities aren’t people being overly sensitive. When you are treated unfairly because of things you have no control over, because of stereotypes, discriminatory practices, prejudices that existed long before you, prejudices that people don’t even realize they have, it can make you feel bad, sure. But it is the inherent unfairness you have no control over that is the point.

We have a remarkable tendency to view fairness as things that are beneficial to us, and then deem things unfair only when it seems unfair to us.

The mayor of Austin recently wrote a response to a letter from a man complaining about a single, women’s-only screening of Wonder Woman. The letter writer essentially complained that women don’t contribute to society, that they are a “second rate” gender, and so they don’t deserve perks like choosing to not be around men for two hours. He also pointed out that women don’t want equality, they want more for women. I frequently hear the complaint that women want to be better than men.[2]

Well, yes, they want what men have, which means more than what they currently have, in terms of employment, wages, personal security, and representation. Yes, that might mean that as a man you sometimes get less, like fewer seats in Congress and cabinet positions than you currently enjoy, but the reason why you should get less is because you have unfairly been getting more your whole life without you realizing it. And things like affirmative action are necessary to feebly attempt to balance hundreds of years of unequal opportunity and possibility.

There are white men who genuinely think that the white man is “the low person on the totem pole” because other people speak up and point out how they are getting screwed over, because of political correctness. White men say this in spite of the rooms full of white men determining the fate of national healthcare, of war, of sovereignty.

If you aren’t one of those white men and you think that you are on the bottom of the totem pole, it sounds more like it’s your feelings that are hurt. You feel bad that you aren’t rich and powerful. That’s not the fault of minorities or women.[3] So, life isn’t what you thought it would be. Life isn’t what you were promised based on the saturation of media that you’ve grown up with, in which white men are the hero of every story and everyone else is window dressing that bends to the white man’s will.

Cry me a river.

The only hero I had was Daria Morgendorffer.

The reality is that economic practices of the capitalist variety screw the great majority of us over socially, and we don’t recognize that or know what to do about it.

I need people to stop treating me like an object and stop talking down to me.

I need it to be possible to succeed in the career that I want to have, even though my gender is a known and widely recognized hindrance to that success.

I need men to stop assaulting and killing women when they don’t do what the man wants.

I need massive redistribution of wealth, and affordable healthcare costs, and the global north to stop perpetuating colonialism via transnational capitalism, and politicians to get out of the pockets of the super-wealthy and start acting like the goddamn public servants they were elected to be, and a Secretary of Education who doesn’t think Jesus rode dinosaurs.[4]

Fuck my feelings? This isn’t about my fucking feelings.

[1] I don’t actually believe in the deterrence theory of punishment, but I didn’t want to get into that here.
[2] Joke’s on you, pal. Women are already better than men.
[3] bell hooks suggested this explanation 33 years ago in feminist theory: from margin to center, and bell hooks is usually right. She suggested that economically disenfranchised men have a choice at this point: to join the other people who are disenfranchised or to take it out on them (or be whiny crybaby trolls on the Internet*).
[4] I don’t know if Betsy DeVos thinks Jesus rode dinosaurs, but she seems like the type, and everything I’ve ever heard her say was either false or stupid, usually both.

*I should make it clear that bell hooks didn’t say that last bit.